Categories Menu
Home » Tidbits » We all have twins 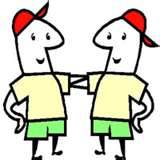 We all have twins

So if you read my last post you’ll remember I was in Denver, Colorado doing some consulting work. It was the middle of the week and I was following my daily routine. I woke up, showered, got ready for work, walked through the hotel lobby, get in my car and head to the office.

This particular morning while I was walking through the hotel lobby I spotted at least five police officers milling around. Since I have the ‘don’t give a shit attitude’ I really didn’t give a shit why. I went to my car and seen several cop cars patrolling the parking lot.

Of course in my mind, I’m thinking “Oh man, I bet some gay dude was hitting on men in the elevator and someone killed him!” . However, I made it to work and the whole cop drama left my mind. Work went by pretty quick and I was back at the hotel and this time there were twice as many cops in the lobby and parking lot.

I went to my room, changed cloths, grabbed my USA Today, and headed across the street to Wendy’s for dinner (I know .. pretty sad isn’t it). I finished up dinner and came back to the hotel.

I was walking to the elevator and passed two police officers going the opposite direction. It was a man and women officer. I took note that both of them were maybe 5’1 or 5’2 at the most. Figured their career in law enforcement was due to ‘short man syndrome’. As, I passed them I did my customary ‘head nod’ and kept walking.

Right before I get to the elevator I hear this ‘jingling of metal’ sound. I knew what it was because I’ve heard it before. It was the sound of officers running and all their cuffs and metal gear on their belts jingling around. It’s a pretty unique sound. I have a lot of police friends that I used to eat lunch with while they were on duty. And it never failed, they’d get a emergency call and take off running.

Then I hear ‘HEY YOU! STOP”. I turn around and these two officers were run full bore at ME! They had their hands on the gun hostler ready to draw. Now, there is one issue that I have since talked to my officer friends and wife about.

Regardless of what you know or think you know, the first thing that popped into my mind was “RUN!” Even though I had absolutely no reason to flee I wanted too. I can’t explain why. In hindsight I should have because I always wondered if these to small officers could have taken me down.  I can see where anyone else who has any type of criminal history will run regardless.

Back to my story, so I stop and waited for the officers to get to me. The little guy pushed me up against the wall and handcuffs me.

I was thinking to my self, “Yep.  Someone killed the gay dude from the elevator and now I’m a suspect.”.  They told me to “Claim down”. At this point I’m getting pissed. I’m not sure what my “rights” are but I’m under the impression that I have to be informed why I’m being detained against my will. So, I told the lady officer,  “It’s easy for you to tell me to claim down. Your not the one in cuffs up against a wall.” The short officer asked me “You have any I.D.?” and I told him “Yeah, it’s in my wallet.”

I kid you not,  he asks “Can you get it for me?” I guess he forgot I was handcuffed up against the wall. I told him “Not at the moment,  I have handcuffs on.”

So, this little bastard took my wallet out of my back pocket and started going through it. He then called his partner over there and they were looking at my picture and talking. At this point I’m lost, I have no clue what the hell is going on.

After a few minutes the woman officer un-cuffed me. The little guy handed my wallet back and apologized for the situation. They inform me that a wanted fugitive with multiple felonies who is considered very dangerous has been spotted in the hotel this week.  That explains all the officers in the parking lot and lobby. The officer informs me that I look just like the suspect.

Yeah, right, I figured it was just some over zealous officers quick to grab anyone. Then the little guy says here look for yourself.

I look at the wanted poster of the criminal and nearly fell over. If I had a identical twin, this guy was it.

If I was in the officers place I’d arrested me. I’m surprised that I wasn’t pulled over or arrested already.

To make matters worse this little ‘show’ happened in the lobby of the hotel. From that point on every time I walked through the lobby everyone would shut up and just stare at me.

Next time I go, I think I’ll stay in a Hilton.