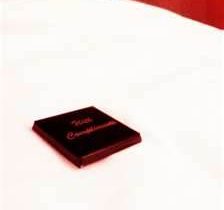 For those of you who might not know – ‘turn down’ service in a hotel chains pretty much consist of some one coming into your room and flipping your sheets down and most the time placing some inedible chocolate or mint on your pillow.

To me, it’s one of the most dumbest things in the world. To actually have someone do that is beyond me. However, some patrons really like it or there wouldn’t be such a service.

One of my consulting gigs required me to spend several months in Foster City, CA. I stayed at a really nice Crowne Plaza that was next to the bay which happens to have a turn-down service. I usually spend 95% of my off time in my hotel room and on this trip I brought my guitar.

Even through I suck playing I like the electric guitar. I couldn’t carry an amp in my luggage so I brought a Pandora’s box. A Pandora ‘s box in it’s simplest form is a pocket amplifier that you can plug your guitar and headphones in so you can practice without disturbing everyone else. It has A LOT more functions but I just used the personal amp settings.

I woke up one morning and was really sick. I called the office and told them I’d be staying at the hotel today and if they needed me just ring me. I slept most of the day away and woke up late that evening. I a lot felt better and took a shower.

When I travel I get a room with two single beds instead of one big bed. I put arrange my cloths and guitar on one bed and I sleep in the other.  When I got out of the shower I went to dried off and went to put my clothes on.

Well, since I think I have ADD, I seen my guitar and grabbed it. I sat down in the chair next to the bed , put in my earphones, and started playing the guitar…. Naked.  I’m not sure if this is considered deviant behavior or not but since I was in MY hotel room, I’ll assume it’s not.  Heck, I think people sleeping in the buff is deviant behavior.

Like all starting guitar players I had developed the bad habit of looking at my hands while playing. When I finished my song and I looked up to see that the young lady who does the turn down server was standing in my room by the door.

At that exact moment I realized two very important things:

I pulled of my head phones and the lady asked me “Turn down service?”.  Really, do you have to ask? You walk into a patron’s hotel room where they are sitting down naked and you have to ask that question?

I just replied, “No thank you.” And she left.

In hind sight, I should have just kept playing my guitar and see how long it took her to leave.