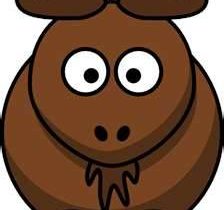 Years ago when I first got married the wife and I lived in a small trailer in McAlester, Oklahoma. Our house was located on 15 acres that joined land to my in-laws. The in-laws had fenced off 10 acres and ran a few head of cattle on it.

One summer an older gentleman from California bought the land adjacent to my in-laws. He was a single older man who worked and retired in California. He owned two houses in an upper scale California suburb. He sold both of his homes in CA and moved to Oklahoma.

He had more money than he knew what to do with from the sale of his houses. He made the brilliant decision of using that extra money to purchase several buffalos and pasturing them next to my in-laws land.

Once his buffalos came in heat they would tear down my in-laws fences to get to their bull. In the process they would constantly gore my in-laws cows. We would run them out and repair the fence. This happened on a daily basis. Until finally my in-laws got sick of the situation and got the law involved.

The ‘buffalo man’ constantly said that my in-laws needed to control their bull and then his females wouldn’t come across which was quite humorous. After law enforcement officials warned him a couple of times he decided to sell the buffalos.

He had no purpose in life so he decided to work for the humane society. However, we didn’t have one out there. So, he created his own. He would take care of all stray animals, yet he did not pen them up. The buffalo man’s house faced a major highway and on a weekly basis we would see several dead dogs in the road from being hit by passing cars.

We all tried to talk to him but he had his mind set on how he was going to do things.

A few weeks by and we didn’t see him or his dogs out side. I guess if I was a good neighbor I would have went to check on him. However, I never did.  Well, one of other neighbors was a mechanic and the buffalo man had dropped his car off to him for repairs.

Several weeks went by and the buffalo man never picked up his car from  George (the mechanic). George went up to his house to check on him. Seems the buffalo man took all 30 or so dogs in the house at bed time like he always did. However, the buffalo man died that night in his sleep. At least that’s what the papers published.

For almost two weeks, 30 or so dogs were locked in a house with no food. When the police and paramedics arrived, the dogs had gnawed off his hands, feet, face, and other parts of his body. In turn, they had to be put down.