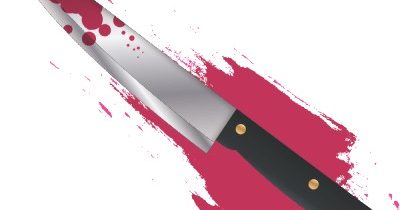 Years ago when I graduated HS I moved to Oklahoma city to go to college. My uncle had this grand plan that I could stay with him, work, and go to school and life would be awesome. My uncle had been a bachelor for years and it didn’t take us both long to figure out that I’d need to find me some new living arrangements. After a few months I moved out of my uncle’s house and in with John and Dee.

During the time I lived with my uncle John was a frequent visitor there. John and Dee lived up the street a mile or so in an apartment complex. After John got off of work and while he waited for Dee to get home he’d come over to my uncles place. They would sit in the living room, drink, smoke and watch T.V.

One night they both filled me in on a incident that happen a few weeks prior to me moving in.

Late one night John shows up to my uncle’s place. Seems John had massive knife wounds all over his arms. He’s bleeding really bad and passes out on the couch. My uncle was a retired military – I think he was medic but I could be wrong. He bandages’ John up and calls his home phone trying to reach Dee – with no luck.

My uncle wakes John up at first light to find out what happened. Seems John doesn’t remember anything. He doesn’t remember getting his arms cut up or what had happened that night. John, worried about Dee runs outside to drive home – no car.

Seems what ever happened last night John managed to walk my uncle’s place.

My uncle and John load’s up and heads to his apartment. They were horrified at what they found. The door was completely kicked in. Blood was splattered all over the walls. Various items were broken all over the floor.

Dee was no where to be found.

John instantly called the police. They started their investigation and searched the place while John got on the phone and called all the friends and relatives – looking for Dee.

Finally, he found her at a Aunt’s house. She picked up the phone and I was told the conversation went something like this:

John: ”Oh my god! Are you alright? I’ve been looking all over for you!“

Police: “Sir, ask her if she knows what happened here last night.”

John: “I called the Police. What happened here last night? Who done this?”

John (to the police): “She was at her aunt’s place. She doesn’t know who did this.”

It seems John got drunk and went home. Dee would not let him in because he was being belligerent. So, he kicked in the door. Dee armed her self with a kitchen knife and started slashing at John while he walked through the hallway. Dee, also threw what ever she could grab at him also. Then, John just turned around and left . He walked to my uncle’s house and – Dee went to her aunt’s place.

I guess that could be construed as ‘true love’. In a side note, John managed to get the apartment complex to replace his door for him for free because someone broke in.